The Comorbidities of Hearing Loss 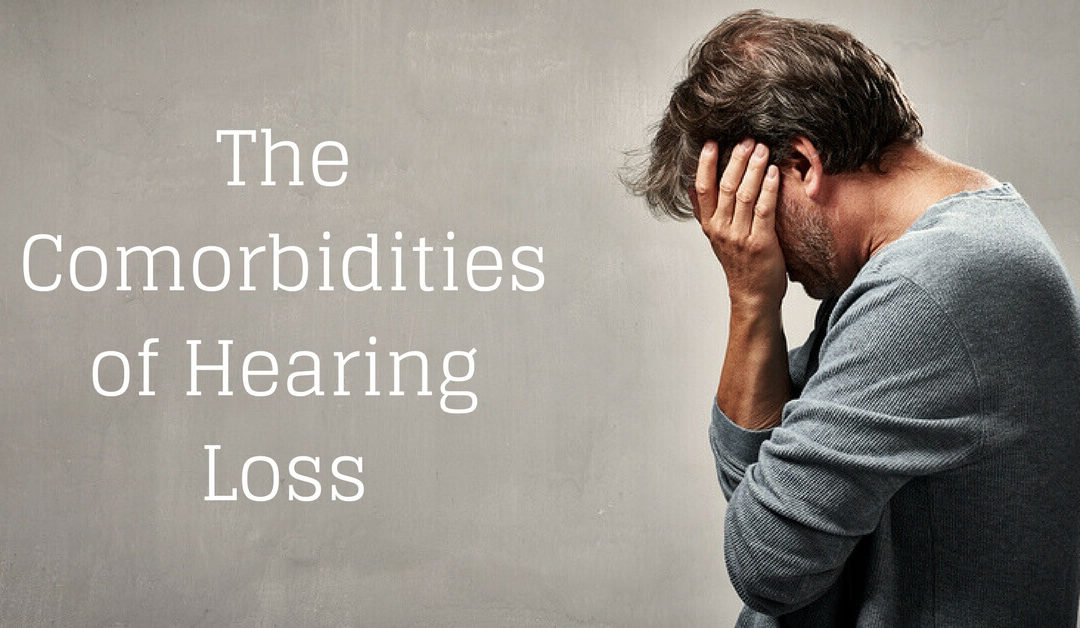 Did you know that hearing loss is the third most common medical condition in the US? Most people tend not to think about hearing loss, or even address, because it is an invisible condition. However, untreated hearing loss does lead to certain negative consequences to one’s health and well-being. And, as with most medical conditions, hearing loss may occur with comorbidities. Comorbidity is a medical term that describes: 1) the simultaneous presence of two chronic diseases, or 2) the presence of one or more additional disorders that occurs simultaneously with a primary disorder.

Heart disease tops the list of most common medical conditions (second is arthritis, and hearing loss, as you know, is third). Believe it or not, there is a link between heart disease and hearing loss. In the auditory process, healthy blood flow is crucial, as parts of your inner ear receive sound waves, translate them into neural signals, and process them in the auditory cortex of your brain. The inner ear environment is a sophisticated system of hair cells, which requires adequate blood flow. Issues with your cardiovascular system could influence blood flow in the auditory process and thus may have adverse effects on your hearing.

The human’s vestibular (balance) system functions closely with the auditory system. Fluids in the inner ear help us maintain a sense of balance in our relationship to gravity and also registers our spatial awareness in the brain. Similarly, we are able to locate ourselves within our environments by processing sound in our auditory system. With untreated hearing loss, our balance and spatial reasoning may be adversely affected.

Though it may seem unlikely and unrelated to you, untreated hearing loss and dementia do have a close link. In fact, this subject has been studied both in the US and international institutions in the past decade.  At Johns Hopkins University, researchers have found that untreated hearing loss increases the risk for dementia due to the cognitive load it places on the brain. In 2011, JH researchers tracked 639 subjects over a span of 12 to 18 years. At the beginning of the study, subjects were subjected to hearing and cognitive tests. Over the years, researchers monitored both abilities concurrently. It was found that subjects with poorer hearing abilities at the start, which were left untreated, had an increased risk of developing dementia.

Hearing actually happens in the brain, and one consequence of untreated hearing loss is that certain areas of the brain, which were utilized to process and analyze sound, now struggle to to make sense of muddled sound signals, which create a heavier “cognitive load.” As this process tires out the brain, patients are at risk for developing dementia.

Another study from 2011, conducted in Japan, provides us with some hope. For this study, researchers gave participants both auditory and cognitive tests, then tracked them for three years. During this time, data show that subjects who experienced hearing loss and were fitted for hearing aids performed better on cognitive tests than subjects with untreated hearing loss. In other words, treating hearing loss, with the prescription of hearing aids, bolsters your cognitive abilities, thus potentially decreasing the risk for dementia.

Untreated hearing loss could adversely affect your mental health. With our interpersonal relationships, open channels of communication are key. Such is the case for our partners, children, friends, and colleagues. In almost every area of our life, from work to home, clear communication plays an important role.

If hearing loss is left untreated, these channels of communication can break down. Difficulty understanding speech in one-on-one conversations or in big group settings eventually lead people to avoid social interaction. Over time, this could lead to social isolation, which is detrimental to one’s confidence and happiness. Struggling with untreated hearing loss also has been found to increase the risk for depression, stress, and anxiety. On the job, untreated hearing loss could interfere with concentration and productivity; studies have found that people with untreated hearing loss tend to have lower earning power than colleagues with normal hearing or who treat their hearing loss with hearing aids.

Even though hearing loss is a common condition among older Americans (one in three people, age 65 and older), it does affect people of all ages. Though one should seek treatment as soon as one begins to experience changes, it takes an average of seven years before people decide to take a hearing test. In this time, the loss of hearing may have taken a toll on one’s health and relationships.

Hearing loss is considered an invisible condition because its effects are not physically evident, but the early identification and treatment of hearing loss with a hearing aid brings many palpable benefits to a person’s life. Contact your local audiologist or hearing specialist today for a hearing exam and consultation.